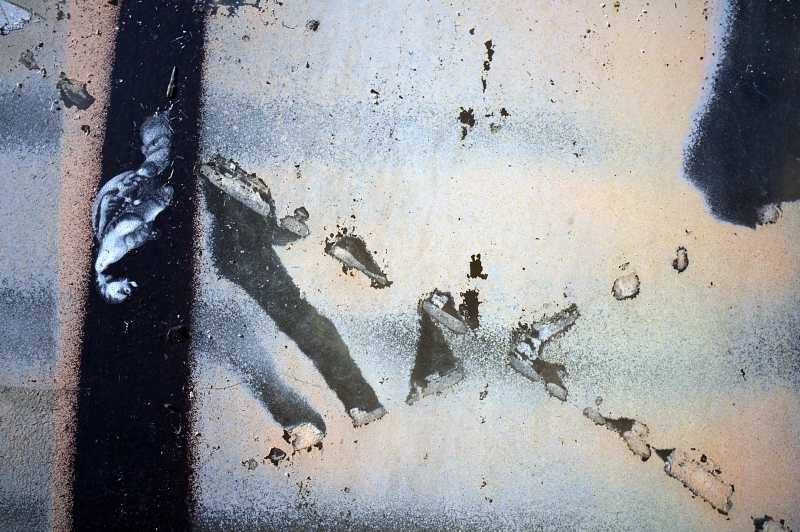 The idea of studying city walls as both a form of urban skin in constant change and archives of recent memory has come from questions related to what remains of the decomposing process of walls’ surfaces used as communication tool, to how do walls react to people affixing/drawing actions, to what are the new aesthetic elements that arise from the interaction people-walls in urban environments.

The analysis is structured along four main lines: 1) the sources of original images affixed, 2) the process of new images creation, 3) the type of images shaped and 4) the way materials mix.

The changing art on the walls reflects the passing of time, and conveys information about the city’s inhabitants, their lives, and culture” (Curtis and Rodenbeck, 2004:1).

The project idea starts with questions related to what remains of a decomposing, erosion process of urban murals, mainly walls, surfaces used as means of communication by a large variety of people. The analysis focuses on the way walls, urban surfaces interact with people, the way in which walls “work”, change due to interaction, the way they react through elements of aesthetic value, coming up as results of human-material world contact.
The purpose of the project is to record this kind of skin and the stories of the urban surface, to classify them according to the materials used and to raise awareness on this subject as part of urban heritage and of contemporary artwork.

The tradition of writing and sketching graphical signs on the public walls goes back to ancient Rome and Greece. While affixing posters, first just texts posters, started during the early times of printing and it was used to acknowledge political decisions and announce public events. With the invention of lithography a mass production and use of murals posters for publicity reasons has commenced.

According to S. Patel “modern graffiti has its roots in 1970s’ African-American hip-hop culture, in which graffiti “tags”, the term for the heavily stylized signatures and symbols that compose a lot of graffiti, were a form of vandalism and protest, a declaration of personal and cultural identity, and a way to reclaim neglected spaces.” (Patel, 2007)

According to M. Gallo, the modern poster can be located around 1850 and is related to the introduction and mass use of colored lithography for advertisement purposes in growing urban areas “for over two hundred years, posters have been displayed in public places all over the world. Visually striking, they have been designed to attract the attention of passers-by, making us aware of a political viewpoint, enticing us to attend specific events, or encouraging us to purchase a particular product or service.” (Gallo, 2002)

Very soon many artists became interested in producing posters and during time they started to be recognized as artworks.

Murals, walls and graffiti or other type of images affixed on them have interested researchers over time for multidisciplinary purposes. Brassaï and E. Haas were among the first photographers who studied the derelict of signs on murals, industrial murals (Brassaï, 30 years, starting with 1930s) and pieces of ruined-down posters (Haas, 1950-1960).
While Walker Evans “has done some magnificent photographs of circus posters on barns and drug stores, ripped by the wind and rain, so that they look like some horrible accident.” (Kirstein wrote to A. Hyatt Mayor, later Curator of Prints at The Metropolitan Museum of Art) (Mellow, 1999:145). They are among the first visual historians, archaeologists of these remnants of urban recent history, recording them for the memory of the present times. I explicitly refer to their body of work while conducting my research.

There is body of anthropological research from analysis of walls as symbols of power, protest and empowerment to graffiti archaeology and studies of graffiti covered walls and their changes over time, as well as of walls as fragile artworks.

For example, T. Ross developed a study on the “Anthropology of ‘The Wall’ with The Cases of Berlin, and Israel and Palestine” concluding that “Walls are sites of manifestations of power” (Ross, 2005)

Another interesting visual analysis of urban murals but mainly related to graffiti is conducted by the group of Cassidy Curtis and published on http://grafarc.org. “Graffiti Archaeology is a project devoted to the study of graffiti-covered walls as they change over time. The core of the project is a timelapse collage, made of photos of graffiti taken at the same location by many different photographers over a span of several years. The photos were taken in San Francisco, New York, Los Angeles and other cities, over a timespan from the late 1990’s to the present. […]Graffiti is the chameleon skin of the urban landscape. Equal parts public art and vandalism, virtuosity and subversion, it is among the most ephemeral forms of human expression.” (Curtis, 2004)

In Representing and Contesting the Past, Laura McAtackney while analyzing Belfast communities “explore murals –- in their landscape setting to highlight interaction with other murals and graffiti — in order to understand their role as conveyors of semi-official narratives of memory and identity and to show how these have been materially contested” (McAtackney, 2011)

“Wild Signs” on another hand, assembles a series of innovative studies in the historical archaeology of graffiti. “Through these case studies, the editors clearly demonstrate the potential contribution of such sites to wider archaeological debates around the study of art and landscape: looking at the effects of artworks, rather than simply trying to interpret their meaning.” (Oliver, Neal, 2010)

Life of signs, drawings, graffiti and affixed posters on mural goes hand in hand with the history of the urban places and industrial progress and the formation of political systems. The study of such signs is related to their appearance during history, their political and or aesthetic meaning. Recent research has focused on the archaeology, the memory shaping of such work and their placement on an artwork category.

Wall graffiti and posters as such found their place in both artwork galleries and social and anthropological studies. But what about what remains between human-mural interactions? Are there derelict compositions a form of art? Do they depict a piece of history?

The analysis was conducted in Bucharest during 2014 and encompassed a central area of the city. A specific zone (see the map below) was chosen for analysis and records were made by taking into account the density of drawings, posters, their overlapping and their changing shapes. In a first phase processes on surfaces of murals, the type of human interventions – affixed posters, written messages, the way murals modified and became ruined over time due to the human intervention on their façades was observed. Human intervention such as affixing paper or drawing was never visible during daytime but materialized only at nighttime. The subjects analyzed are central murals with no specific legal restriction to human intervention on them. Abandoned locations out of people’s sight were more frequently chosen as sites for action. Messages left on the murals are from all possible sources ranging from public administration to private bodies and individuals. Messages are of various kinds, and only very few of them are subversive in nature and often in a very elusive way, mainly through iconic symbols and double meaning sentences. There are a lot of announcements of public events, concerts, fares affixed together with election ripped posters or services, job offerings.
At a first sight all murals look the same, but at a closer analysis patterns made of paper, glue, bricks and spray drawing can be discovered.

Parameters of the project

The project’s objective is to survey the physical and aesthetic transformations of street front murals in the center of Bucharest. I followed the street front buildings façades and walls used to affix advertisements, notices, information, public and private messages and graffiti. The project started in June 2014 and the first results were discussed in a public debate at Photo Hub premises, Bucharest.

Basically the use/reuse of these surfaces without any cleaning allows the appearance of beautiful images out of nothing.

The idea of studying these transformations started with the photographic expediencies of Brassaï in derelict industrial and urban walls, and continued with “What Remains”, the photographic research conducted by Sally Mann as well as the photocomposition of fragmented posters made by Ernst Haas and Walker Evans.

Brassaï completed a photographic project named Graffiti, published in 1961, a work of 30 years of observation in Paris. The collection includes a group of photos of graffiti named the language of the wall. He was interested in the way graffiti and derelict walls worked together and the way in which surfaces and images alter during time also due to overlapping.

“What Remains”, the visual research of Sally Mann published in 2003, is built on images featuring death and integration with nature including human bodies while decomposing (as part of University of Tennessee experiment). Sally Mann photos visually presents the cycle of life, death and regeneration.

Finally, Ernst Haas was passionate with color and surrealism of dreams and tried to give a new sense to common things into his pictures. He used the urban space of New York as his playground and turned back to life agony-shattered posters from the façades of buildings by giving them a new aesthetic interpretation and a place in art galleries. Walker Evans has done photographs of circus posters and other vernacular materials in urban areas ripped, deteriorated by the wind and rain.

Each of these experiments concerns giving a new aesthetic sense to surfaces, materials, bodies undergoing erosion, damage. The rationale behind is always erosion due to lapse of time. In this project, a new dimension linked to human intensive intervention has also been explored.

Type of images discovered and ways of constructing

New images of aesthetic attractiveness are built due to interaction mural-humans. Considering the series of photos taken the following classification is proposed.
1. Images constructed with the glue that remained on the walls after posters physical destruction together with fragments of paper
2. Images constructed by partial openings on the murals surfaces due to violent posters destructions and the coloring process of the wall after affixing colored posters
3. Images built out of glue and fragments of paper and spray colors
4. Images constructed while overlapping paper, other materials, colors

Apart from the objective presentation of the way in which these images are constructed, as part the reality of which they belong, a question about their aesthetic value and memorial of the urban space arises.

Roland Barthes considered photography as a message without a code more than a presentation of the objective reality, a product of the choices made while photographing, an altered form of it. (unreal image but possible part of reality)

While categorizing images I have used analogies with the aesthetic world without distorting them in a digital way. Surprisingly I have found that these murals reorganize on their surfaces the world outside them and present it under a new light, as a new possible discourse of power over material culture. These images narrate in a peculiar way the communication process material-human, encapsulating the memory of their time and giving it a new aesthetic dimension. They become an astonishing art gallery themselves.

Thesis:
Ross, T. (2005), Towards an Anthropology of ‘the Wall’: The Cases of Berlin, and Israel and Palestine. Department of Anthropology, University of Sussex, Sussex.

The original article was submitted to the I Encontros de Fotografia / FLUP (Porto, Portugal) and it was published by the magazine Revelar: Revista de Estudos da Fotografia e Imagem.
A pdf version of the article is already available on-line, you can access the electronic number at n. 1 (2016) Revelar: http://ojs.letras.up.pt/index.php/RL/index
The publication will soon launch a call for papers for the second edition of the Meetings and the second volume of the magazine.